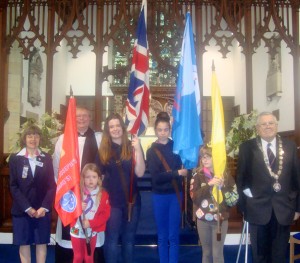 On Wednesday 30th April 2014 Father Adam led a special service of Dedication and Blessing of Flags at St Leonard’s Parish Church Loftus.  In total the Rector dedicated and blessed four new flags for use by Loftus Guides, Brownies and Rainbows.

The first flag to be dedicated was the Union Flag of the United Kingdom.

After dedicating and blessing the flags the Guides, Brownies and Rainbows were then asked to renew their promises in Church alongside the County Commissioner Christine Brooks and in the presence of the Mayor of Loftus Cllr Andrew Downs.

The Loftus Guides, Brownie and Rainbow Units are recognised as being among the fastest growing units in the country and are quickly becoming a real asset to our town and parish.

Further information about the Loftus Unit can be found on their website by following this link http://1stloftus.weebly.com