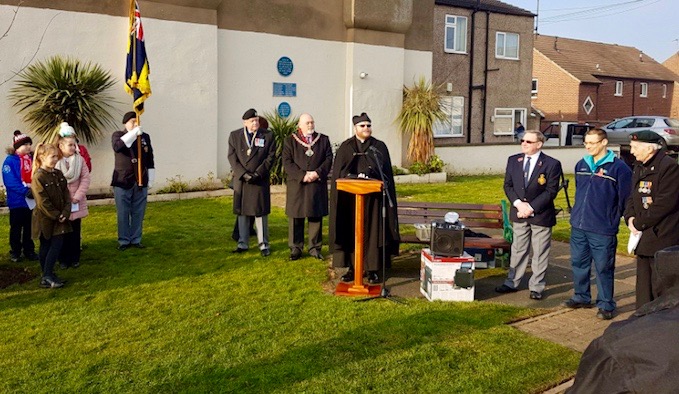 On the morning of Friday 27th January 2017, in his capacity as Chaplain to the Worshipful the Mayor of the Borough of Redcar & Cleveland, Father Adam Gaunt was invited to lead special prayers, at the Holocaust Memorial Day Service in Redcar.

Civic dignitaries and community leaders were joined by members of the Royal British Legion and students from Coatham CE Primary School for the service, which included the unveiling of a commemorative plaque by the Mayor and the planting of spring bulbs by the students.

As the service concluded, Father Adam read the powerful Statement of Commitment, which is printed here:

The Statement of Commitment

We the people of Redcar & Cleveland recognise that the Holocaust shook the foundations of modern civilisation. Its unprecedented character and horror will always hold universal meaning.

We believe the Holocaust must have a permanent place in our nation’s collective memory. We honour the survivors still with us, and reaffirm our shared goals of mutual understanding and justice.

We must make sure that future generations understand the causes of the Holocaust and reflect upon its consequences. We vow to remember the victims of Nazi persecution and of all genocide.

We value the sacrifices of those who have risked their lives to protect or rescue victims, as a touchstone of the human capacity for good in the face of evil.

We recognise that humanity is still scarred by the belief that race, religion, disability or sexuality make some people’s lives worth less than others.

We have a shared responsibility to fight these evils.

We pledge to strengthen our efforts to promote education and research about the Holocaust and other genocide. We will do our utmost to make sure that the lessons of such events are fully learnt.

We will continue to encourage Holocaust remembrance by holding an annual UK Holocaust Memorial Day. We condemn the evils of prejudice, discrimination and racism. We value a free, tolerant and democratic society.