1900 The Laying of the Foundation Stone

The Eve of Ascension Day Wednesday 23rd May 1900 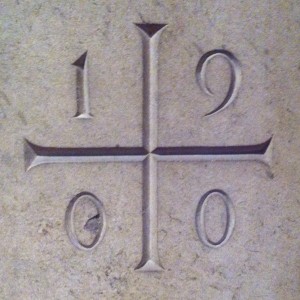 The foundation stone of St Helen’s Church, for the villages of Carlin How and Skinningrove, was laid on Wednesday 23rd May 1900 at 4:15 pm.

Mrs Dorman along with several other kind friends who came to be present at the ceremony, were all met at Carlin How station at 3:50 pm.  They were preceded to the site of the New Church by the Iron Work’s Band playing National Airs along the route.  Meanwhile a large concourse of friends and neighbours and parishioners gathered within the walls of the New Church.

A procession was formed in the adjoining tent of those who were more immediately to take part in the service.

First came Mr J.T. Young bearing the processional cross, followed by the surplice choir boys and men walking two and two under the leadership of Mr I’Anson.  These were followed by the clergy who were again followed by the lay officials of the Church.  Then came Mrs Dorman and those accompanying her.

A bottle was prepared by Mr D.W. Dixon containing a brief account of the ceremony of the day.  A list of the principal subscribers to the Church, some new postage stamps, some coins, a newspaper for the day, and a copy of the parish magazine having already been previously deposited in a cavity beneath the foundation stone by Mrs Dixon, with the assistance of Mr Cruddas the contractor.

The clergy present were as follows:

The service began with the singing of the hymn “Christ is made the sure foundation.” At the conclusion of the first part of the service (which was taken by the Rural Dean) Mr Charlewood of the firm “Hicks & Charlewood” the architects handed to Mrs Dorman a silver trowel wherewith to lay the stone.  The trowel bore the following inscription:

Presented to Mrs Dorman of Grey Towers, on the occasion of her laying the foundation stone of St Helen’s Church Skinningrove the Eve of Ascension May 23rd 1900

Mrs Dorman having duly used the trowel in the preparation for the stone, which was carefully lowered by Mr Cruddas and Mr Foster (the foreman) and having tapped the stone thus laid three times with a mahogany mallet lent by the architects, Mrs Dorman declared:

In the Name of the Father and of the Son and of the Holy Ghost, we lay this corner stone of a Church to be dedicated to the perpetual service of Almighty God and to the holy memory of Saint Helen

1901 The Consecration of St Helen’s Church

The consecration ceremony began at a quarter to three o’clock.  Mrs Keen, Mrs Crow and Mrs Jefferson of Furnace Cottages kindly lent their houses for the Clergy and the Bishop and the Choristers to robe in.  When all was ready a procession was formed outside the cottages for the West Door of the New Church.

Mr Young carrying the processional cross (the great emblem of the Christian Faith) led the way.  Then came the boys and men from the choirs of St Helen’s and from St Margaret’s Brotton.  They were followed by the clergy as follows:

The Lord Bishop of Hull the Rt Revd R.F.L. Blunt DD  was followed by the Diocesan Registrar, H.A. Hudson Esq. who read the Deed of Consecration and The Revd E.F.S Besley Vicar of Eston and Rural Dean of Middlesbrough, who read the lesson at the altar and acted as chaplain to the Bishop.

The Choir and Clergy having entered the Church and filling the aisle, the door was closed while the Bishop and his attendants remained without.  Knocking three times at the door the Bishop called out “Open, ye the Gates!”  The doors were then opened and the Bishop entering proclaimed the threefold salutation:

After this salutation the Bishop said, “Let us begin in the Name of God.”  And all singing the hymn, “All people that on earth do dwell” the Choir, Clergy and Officials proceeded to their allotted places.  The usual form of Consecrating Churches for the Diocese of York was then used.

At the close of the ceremony the Bishop preached a sermon based on Psalm 84 and verse 7 “They will go from strength to strength and unto the God of gods appeareth everyone of them in Zion.”

During the singing of the last hymn an offertory was taken on behalf of the Building Fund, and after the blessing by the Bishop, the Choir and the clergy re-formed and passing through the West Door proceeded again to the cottages to un-robe.

The excellent, first rate tea was held in The Institute Skinningrove.

The first service in the New Church was Evensong, which began after tea at 6:45 pm attended by many members of the clergy and people.  This was followed by a supper.

The harmonium was played throughout the two services by Mr Blaylock, who has kindly consented to act in this capacity.

October the thirtieth was a day of much joy to very many members of our parishes.  It was a great joy to see the crowded assemblies within St Helen’s walls.  May this be no uncommon sight!  May it be what which we shall witness Lord’s day after Lord’s day!  We were indeed glad when the bell of St Helen’s rang out the invitation to us all.

1919 New Eagle Lectern Commemorates the 1915 Zeppelin Attacks on Carlin How, Skinningrove and Loftus 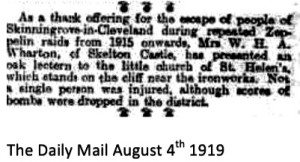 Eucharistic Vestments are donated to St Helen’s Church Carlin How by All Saints’ Parish Church in Middlesbrough and are used at the Holy Communion for the first time.

Permission is sought for the erection of the Stations of the Cross, which remain in St Helen’s Church to this day.

Following damage to St Helen’s Church Roof by enemy action, the Church makes a claim for “war damage” and essential roof repairs.  Meantime the Church Hall is used as an overflow Canteen for the growing number of workers at the Skinningrove Iron and Steel Works. 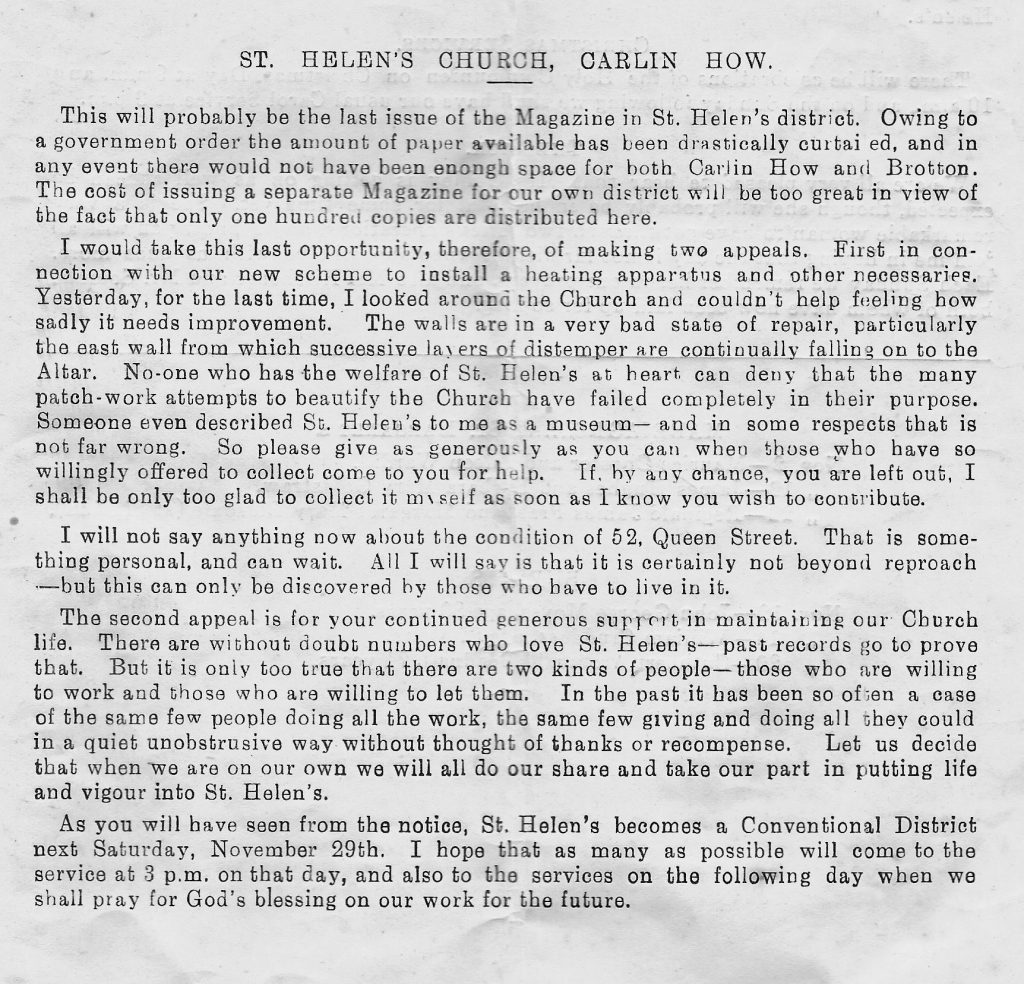 In August 1951 two five branch Benediction Candelabra were donated to St Helen’s Church by Dr Ross to the Glory of God and in memory of his wife.  The photograph above shows the candelabra in use January 2014.

1952 Carlin How with Skinningrove becomes its own Parish

The Conventional District became a Parish in its own right by Order-in-Council made by HM The Queen on the 6th June 1952 effective from 13th June 1952.  Thus, St Helen’s Church becomes the Parish Church for the villages of Carlin How and Skinningrove and the Curate-in-Charge The Revd Alan Beere Johnston becomes the first Vicar. 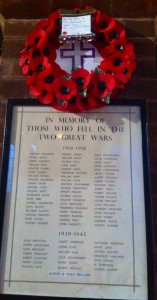 The St Helen’s Church War Memorial to those who lost their lives in the two World Wars is unveiled.

1956 A Church in Skinningrove Village?

St Helen’s Parochial Church Council purchase land in Skinningrove for £15 and earmark it for the site of a daughter Church to be dedicated to St Francis of Assisi.  The Church was to be built by volunteer labour.

1962 The Church of St Francis of Assisi abandoned

Only six years after buying land and starting construction of the daughter Church of St Francis of Assisi in Skinningrove village; the Church Council admit that the project was too large for them and Loftus Urban District Council take over the ownership of the land in return for clearing away the remains of the half built church.

1970 Future of the Parish is Discussed

Following the departure of Father Tregeare as Vicar in August 1967 the parish faced an uncertain future.  The vicarage remained vacant and it became increasingly clear that the Parish no longer warranted its own full time vicar.

Further discussion were held to assess the viability of creating the Benefice of “Carlin How with Liverton” with the Vicar living in Liverton Mines.  However, these plans also proved to be unworkable.

On the 8th January 1973 the Rector of Loftus, The Revd John Walter Theobald, became Priest-in-Charge of the Parish. 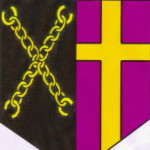