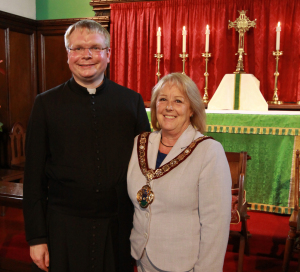 By kind invitation of the Worshipful the Mayor of the Borough of Redcar & Cleveland, Father Adam attended and said Grace at the Mayor’s Charity Ball, which was held at Gisborough Hall Hotel in Guisborough on the evening of Thursday 16th April 2015.

The Mayor’s Charity Ball is one of the highlights of the Civic Calendar and comes toward the end of Cllr Simms year in office.