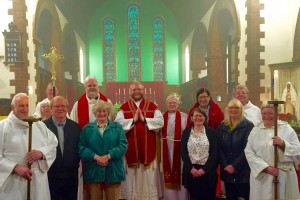 On the evening of Tuesday 28th June 2016 twenty members of the East Cleveland Walsingham Cell gathered at Saint Helen’s Parish Church in Carlin How for a special Mass in honour of Saint Peter the Apostle.

The Mass was celebrated by Father Adam Gaunt Rector of Loftus, Carlin How and Skinningrove and was assisted by the Rector of Brotton and the Rector of Skelton-in-Cleveland.  A team of serves from across East Cleveland also assisted at the liturgy.

In his sermon Father Adam reminded the congregation that we in this great diocese are to look to the example of our Patron Saint, Saint Peter, and to confess Jesus to be nothing less than, “The Christ, the Son of the living God!”